“I felt my lungs inflate with the onrush of scenery—air, mountains, trees, people. I thought, "This is what it is to be happy.”

We were sitting in a copse by the edge of the river, listening to authors reading from their works, when thin dust coloured leaves began pinwheeling toward the earth with the most extraordinary grace.  They seemed circularly suspended, independent of gravity, travelling in wide loop-de-loops, their mother tree whispering over them.  I was so astonished by the little leaves that I held my hand out hoping one would eventually come to rest in it.  Ali Cobby Eckermann leaned a little closer to me and said: "Spirits".

I have spent the last four days in the Kimberley, having been invited to present at the Kimberley Writers Festival.  I'd only been there a couple of hours before I understood why this is the Festival everybody wants to be invited to.  And invited back to.

It's the joy.  There are few, if any, formalities here - just a love of stories and the people who tell them.  And this is a place full of stories.  You can feel it.  The air tastes different and the rocks speak.  The sun simmers your bone marrow and the river listens.  I pressed my palms against the hot skin of a paperbark on Sunday and hoped for just a little transference, hoped that when I had to leave some remnant of the place would continue to thrum in me.

The community embraced us with an affection and enthusiasm that is representative of the Festival itself.  The school day presented the opportunity to speak with some remarkable young adults as well as coordinate a writing workshop for Year Sevens.  On the public discussion panels I was fortunate enough to share a couch with Deb Fitzpatrick, Robert Schofield and Marie Munkara - and when I wasn't on the couch I was in the audience listening to Julienne Van Loon, Terry Denton, Ron Elliott, Craig Smith, Susan Duncan and Ali Cobby Eckermann.

Jo Roach and her inimitable, tireless team managed to keep us all where we were supposed to be when we were supposed to be there (or as she calls it "herding cats"), and provided me with a real experience of this community and the hot, living earth that cradles it.  I haven't just felt well looked after, I've felt real affection in the enthusiasm I've experienced here, and I reciprocate wholeheartedly.

The food, the wine, the people, the stories, the spirits.  It all comes back to the stories and the spirits for me.  I had that moment encapsulated by those little leaves.  One of them skidded past my index finger but refused to be caught.  In that moment, when the spirits were mooching about in the shadow of those blood-rust cliffs, and people with stories to tell were telling their stories, I realized just how insignificant we are.  That's comforting. 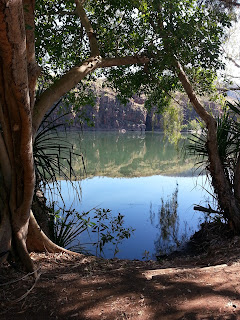