Are We There Yet?

“Never go on trips with anyone you do not love” – Ernest Hemingway
We’ve all been on those road trips, both as children and adults.  I remember sitting in the back seat of my parent’s old green Holden driving to Bunbury to visit my father’s cousin’s dairy farm when I was little, struggling for space with two equally bored sisters who came up with the game of let’s-annoy-each-other-for-fun at precisely the same time I did, motivating a bitch-slapping counterpoint of “Knock it off!” from front seat parents who were probably thinking they should have left us in the back yard with a bowl of water, like they did the dog.
Then you’re a parent yourself and travelling with small children who never shut the fuck up, fart in the car without warning, constantly complain of being bored despite your fanatical faith in the Game Boy you thrust at them as soon as the ignition key is turned, and they always need to pee precisely five minutes after you have pulled out of the gas station but refuse to use a bush on the side of road because it’s not private.  You drag them back to the car and make them sit on a towel because you just know, and seriously think about dosing them up with Nyquil and filling their mouth with peanut butter.
Finishing a first draft, especially the first draft of that bugbear of literature – The Second Book – is a lot like the road trip.  It’s exhausting, exhilarating, satisfying, terrifying, and there is always that god awful smell from the back seat and the niggling misgivings about the sanity of getting in the car with the thing in the first place.  Then there is that awful question that sends a cold chill and homicidal impulse through every parent: Are we there yet?
I’ve finished this first draft of the second book and yet...have I?  When do we actually stop?  Like the road trip we get out and admire a view feeling all “this-was-so-worth-it”, but then we get back in the car and keep driving until we find another view.  Eventually we have to decide when we can share the view, knowing full well that while you believe you’re looking at the Grand Canyon, the person sharing the view with you might be seeing a pot hole.
Ok.  I think I’ve beaten that road trip metaphor into a coma.
I’m going to give myself a couple of days to read and re-read.  I’m going to criticize myself mercilessly, because that’s what I do to prepare for another’s criticism.  Then I’m going to send it on its way.  I’ll be sitting on a towel waiting on the verdict. 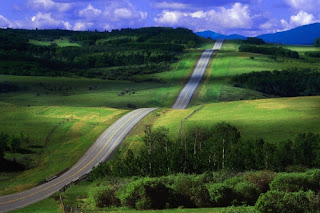